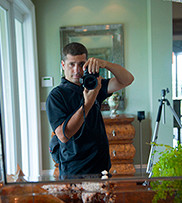 
Rick is a professional photographer who served as the university photographer at Ohio University (in the top 10 photojournalism schools in the country) for 16 years and was in Key West for 4 years. Rick is now a lecturer at The University of Texas Rio Grande Valley at Brownsville. Rick is very experienced. Not only does he have an MFA in photography from Ohio University and a BFA from California Institute of the Arts; he also is a master of lighting, photojournalism, and portraiture. Rick will capture the essence of your photo shoot. He is among the finest photographers in Brownsville.


Rick received his BFA, majoring in photography, at the California Institute of the Arts. He went on to receive his MFA in Photography at Ohio University, one of the top 10 Universities Nationwide for photojournalism. During his career that followed, Rick mastered lighting, photojournalism and portraiture.

Rick’s photography has been published internationally in publications including Sports Illustrated, American Profile Magazine, Great Lakes Publishing, Ebony Magazine, Outlook, Perspectives, Admissions Bulletin, Ohio Magazine and Ohio Today Magazine. His work has also been used by newspapers worldwide. His shots were on the front page of Cleveland Plain Dealer and in the Korean newspaper; Chosen Ilbo, as well as The Columbus Dispatch, Chronicle of Higher Education, Athens Messenger and Athens News. His photography has also been used by websites and science blogs such as CNN’s website and Phys.org, Science Daily, Getoutzine.com, Voyle.net, Spacedaily.com, and Newswise.com, and Viakeywest.com.

Even giving the steep competition, Rick was hired straight out of graduate school to fill the esteemed position of head and sole University Photographer at Ohio University. He held that position for 16 years, working directly under the President in the office of Communications and Marketing, overseeing a team of freelancers and graduate student photographers. Many of his trainees went on to win awards and land a National Geographic internship, Fulbright Scholarships and one was a featured photographer in Photo District News. While at the University Rick was also hired by the Ohio Appalachian Center for Higher Education for various publications.

Rick has traveled and lived in many states across the US seeking new and interesting photographic subjects. His search has brought him most recently Brownsville, Texas in 2014 and was in Key West, FL, were he resided since 2010 and was ranked as one of the finest photographers in the Keys. He is now serves South Padre Island. He captures life with grace and his fine art photography often captures a feeling of surreal within the real.